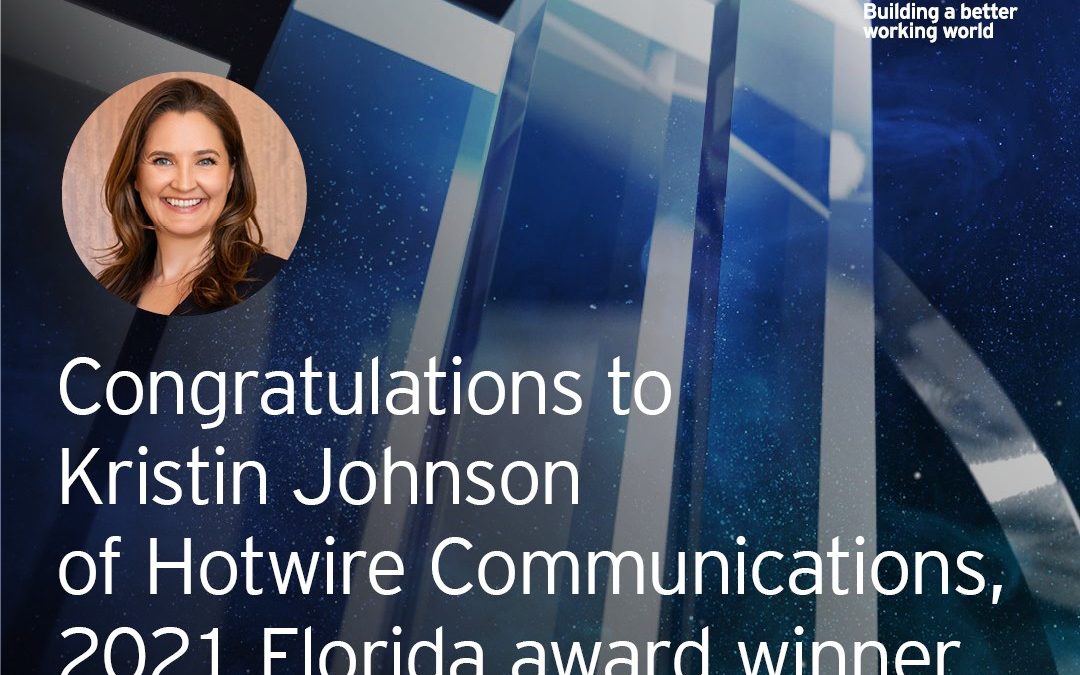 Ernst & Young LLP (EY US) yesterday announced that CEO & Co-founder Kristin Johnson of Hotwire Communications was named an Entrepreneur Of The Year® 2021 Florida Award winner. The Entrepreneur Of The Year Awards program is one of the preeminent competitive awards for entrepreneurs and leaders of high-growth companies. The award recognizes those who are unstoppable entrepreneurial leaders, excelling in talent management; degree of difficulty; financial performance; societal impact and building a values-based company; and originality, innovation and future plans. Kristin was selected by an independent panel of judges, and the award was announced during the program’s virtual awards gala on August 5, 2021.

Kristin Johnson founded Hotwire Communications, a telecommunications company and Internet Service Provider (ISP), in 2000 with a mission statement to combine state-of-the-art technology solutions with a concierge-style, white glove customer service experience that would be unparalleled in the industry. In the more than two decades since, Hotwire Communications has been at the forefront of innovation, establishing itself as an industry trailblazer by becoming the first ISP to commit to using 100% fiber optics for its network infrastructure, the first in the state of Florida to deliver Fiber-to-the-Home services, and the first in the state to deliver Gigabit-speed Internet and Internet Protocol Television (IPTV).

“This is such a tremendous honor, and I can’t thank EY US and the judges for placing me in the company of so many distinguished past and present winners,” said Kristin. “This truly humbling award is really a testament to the incredible team I have supporting me. Hotwire’s success over the years wouldn’t be possible without their dedication to the company’s values, and their commitment to always upholding the high bar we’ve set for ourselves.”

EY US’s distinction of Kristin as the 2021 Florida Entrepreneur of the Year is only the most recent recognition of Kristin’s leadership skills and business acumen, as she was recently named by Cablefax as one of their Top 100 Power Players in the cable industry.

For 35 years, EY US has honored entrepreneurs whose ambition, courage and ingenuity have driven their companies’ success, transformed their industries and made a positive impact on their communities. Kristin will go on to become a lifetime member of the esteemed multi-industry community of award winners, with exclusive, ongoing access to the experience, insight and wisdom of fellow alumni and other ecosystem members in over 60 countries — all supported by vast EY resources.